I was diagnosed with pityriasis rosea

At the end of February, 2009, for approximately 3 weeks, I presented with itchy red scaly plaques on my abdomen and it was diagnosed as pityriasis rosea.  This was characterised by red oval-shaped spots and the presence of a larger very distinctive “herald lesion” that appeared about a week previous to the smaller spots.  This is an unmistakable sequence of eruptions that leave no doubt during diagnosis.

Pityriasis rosea (“rose-coloured scale”) is an acute inflammatory dermatosis with a distinctive and constant course of self-limiting oval lesions.  It presents with a primary plaque, known as the “Herald Lesion”, up to two weeks prior to the outbreak of a the secondary rash of numerous widespread plaques, which are much smaller in size.  This rash, predominantly of the trunk, usually remains for about 6 weeks.  The condition is non-contagious or is of extremely limited virulence. 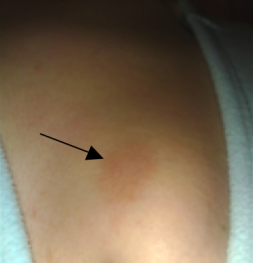 This photo shows the “Herald Lesion” I presented with on my chest about one week before the eruption of the secondary rash.

The “herald” patch usually increases in size over the first 48 hours, reaching up to as large as 10cm, in some people. In my case, the herald lesion increased in size, but only up to approximately 3cm in diameter.

In the early stages of the condition, the appearance of the lesions show great similarities to ringworm, (particularly the herald lesion) as well as psoriasis and discoid eczema.  I initially held the opinion that my herald lesion looked like ringworm due to its circular reddened scaly appearance.

Pityriasis rosea has a seasonal eruption, most commonly occurring in the months of December to February and mostly in females, particularly between the ages of 10 and 35 years.

Prior to my herald lesion, I presented with a sore throat, which is also characteristic of this condition.  Other symptoms that I presented with were fever, nausea and severe fatigue, having found myself falling asleep if I was left sitting down for more than 10-15 minutes, and just the general feeling of drowsiness whilst up and about.

After the appearance of the herald lesion there is a secondary incubation period of 7-14 days before the eruption of multiple similar, but smaller, elliptical scaly lesions.  It has been discovered that these smaller lesions take their positioning on the body with their longest axis occurring along the Blaschko skin tension lines, producing the classic “fir” or “Christmas tree” appearance.  The centres of the lesions are generally more erythematous than the periphery, which are scaly. 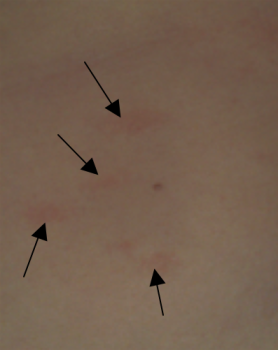 A close up look at the scaly erythematous plaques that I presented with about a week after my herald lesion. 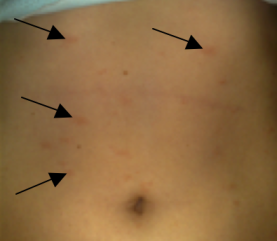 The distribution of my secondary rash was predominantly spread across my abdomen, with only a few presenting on my shoulders.

I was relieved to read that it is unusual for the red plaques to form on the face or to leave scars.  Only in very rare cases are there localised, unilateral and “inverse” forms that affect the face and extremities in a severe way.  Pityriasis rosea is itchy, and luckily I only suffered from mild itchiness, but some cases have been reported to be unbearably itchy.

Initially I was routinely cleansing my skin with regular shower gel, but I soon discovered that it can aggravate pityriasis rosea even more.  I was advised that only soaps containing moisturisers (such as goat’s milk) should be used, however, any deep moisturiser can help manage the extreme dryness.  A plus point with this condition is that the itchiness tends to reside sooner than the rash.

The exact etiology of this skin disorder is unknown, but it is believed to be connected to some kind of infection, most likely viral.  It is speculated that the herald lesion is the probable site of an insect bite.  Other cases have been reported where lesions have erupted along areas of past trauma and scars, suggesting an isomorphic (Koebner’s) response.  There have also been reports of atypical pityriasis rosea in bone marrow transplant recipients and patients post interferon-alpha (IFN-α) treatment.

The only treatments available are those which relieve the irritation of the itchiness.  Soap must be avoided, the lesions must be kept moisturised and, in cases of severe symptomatic itching, topical or oral steroids may be prescribed.  Doctor-operated UV therapy, or simple exposure to sunlight can also help in some cases.  Prevention of further aggravation can include avoiding physical activity, hot baths and generally anything that can cause the body to over heat.  In most patients, the condition only lasts a few weeks.  I myself only had it for just over three.

Hello, my name is Della and I'm a Specialist Scientific Lead in histological dissection working for the NHS in England.
View all posts by Della Thomas »
« Love your heart
Ask the expert: HEART EDITION »

19 thoughts on “I was diagnosed with pityriasis rosea”