This quarter we’re going to take a look at a tumour of the nervous system; the schwannoma. Historically known as a neurilemmoma, this is a benign tumour of the peripheral nerve sheath. Before we dive straight into the histology, let’s start with breaking that down so we can appreciate what it all means.

…is an abnormal growth of tissue that is non-cancerous, so we won’t be expecting to find any sinister-looking microscopic features (like nuclear atypia or invasion) in these lumps. Some specifics about the nature of schwannomas are that these are slow-growing tumours that rarely cause pain or neurological symptoms, so often go undetected for many years. When one grows within a small nerve, it often feels quite mobile around a single thin attachment point. Within larger nerves, however, the attachment point has a much wider base and so is not as freely movable. Also, these tumours don’t tend to grow much larger than 5 cm, unless located with the deep areas of the retroperitoneum or mediastinum.

In our bodies, our nervous system is divided into two sub-systems:

1)  the central nervous system (CNS), comprising the brain, spinal cord, and neural parts of the eye.

2) the peripheral nervous system (PNS), comprising, basically, everything else outside of the CNS including peripheral ganglia, nerves, nerve endings that connect the PNS to the CNS, and receptors and effectors of the body.

So, the ‘peripheral’ aspect of the tumour demographic highlights that these tumours will only be found within the PNS.

Essentially, a nerve sheath is a coating around nerve tissue. With regards to a schwannoma, the sheath in question is a fatty/waxy substance that wraps in multiple layers around the axon within the conductive region of a neuron. This substance is called myelin and is produced by the Schwann cells that you can see in the following diagram of a transverse slice through a nerve:

False-colour image showing the anatomy of the nerve

As for many discoveries, and this case is no exception, Schwann cells are eponymously named after someone really rather clever, and quite a bit of a legend in histology if you ask me (he only went and devised the classification of tissues!!). They were named after the German physiologist and anatomist, Professor Theodor Schwann (1810-1882), who discovered them in the 1830s during his studies of peripheral nerve cells.

Not all Schwann cells produce myelin, and their function varies depending on whether they synthesise it or not. Myelinating types coat and insulate the axons with myelin to increase the efficiency of signal conduction along the neuron while also conserving energy. It is these types of Schwann cells that occupy the entire population of cells within a schwannoma; pretty much where there’s a nucleus, it’s a Schwann cell! Non-myelinating types, however, have a role in axon repair by occupying the damaged areas and stimulating regeneration.

At last, the histo…

We’ll observe the histology of this tumour by working from its outermost layer to its inner.

Schwannomas are typically described as ‘encapsulated’ tumours because of the prominent capsule that surrounds them, as we can see at the edge of the tumour in the following photomicrographs. This is a fibrous capsule made up of epineurium (the outermost coating of a nerve fibre, as shown in the earlier diagram) and residual nerve fibres.

A low power (LP) and a medium power (MP) haematoxylin and eosin (H&E) stain showing the microscopic appearance of the fibrous capsule that surrounds a schwannoma. The schwannoma itself is below the capsule labelled ‘Tumour’

You may have already noticed from the first images that as we move inwards through the tumour, it comprises two distinctive architectural patterns of cells. One pattern is particularly busy with swirling crowds of purple elongated rods (they’re the Schwann cells’ nuclei), and the other pattern is more pale-pink and spacious.

It is the alternating areas of these patterns that are the hallmark presentation of a schwannoma, and these patterns are so special they’ve even been given their own names! The cellular areas are known as Antoni A areas, and the spacious ‘paucicellular’ areas are known as Antoni B areas. These are also eponymously named, but this time after a Swedish Professor called Nils Ragnar Eugene Antoni (1887-1968) who first described them in 1920 after he analysed 30 cases of a ‘peculiar encapsulated nerve sheath tumour’.

Antoni A areas consist of short bundles made up of densely compact spindly (thin and stretched-looking) Schwann cells, whose edges appear quite blurry, and they often have twisted nuclei that sometimes contain clear spaces (vacuoles) within them.

A high power H&E showing the crowded, swirling nuclei of Schwann cells in the cellular areas of the tumour known as Antoni A.

A high power H&E showing the spacious areas of the tumour known as Antoni B.

Professor Antoni, however, was not the first to notice a recurring feature of these tumours. A decade prior to Antoni, a Uruguayan physician named Dr Jose Juan Verocay (1876-1927) had discovered that the cellular component of the tumours often displayed elongated nuclei in two parallel rows that are separated by seemingly clear-zones consisting of just pink cytoplasm. Verocay gave the name ‘Verocay body’ to this pattern, and this is what it looks like in a schwannoma: 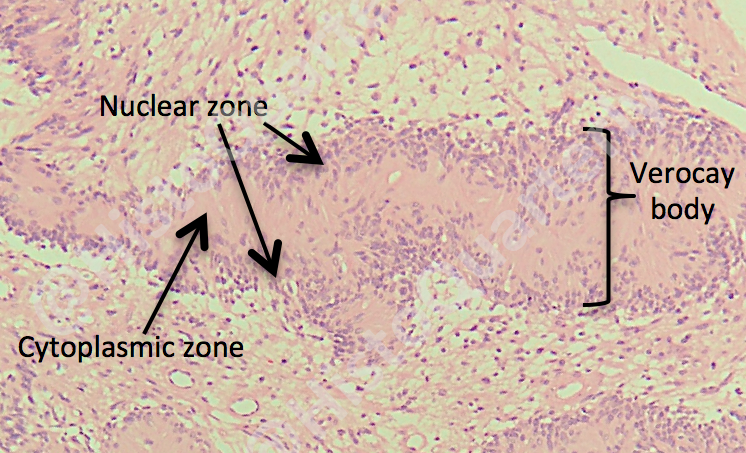 A term often used in the microscopic description of a schwannoma is ‘palisading’ nuclei. This is when nuclei arrange themselves neatly together in rows, like slats in a fence, and perpendicular to the same surface. These are not exclusive to schwannomas, but here’s a really nice example of this from one:

When the histological architecture of a suspected schwannoma is not characteristic, possible differential diagnoses could be a cellular schwannoma or a neurofibroma. Here is an example of such a case: 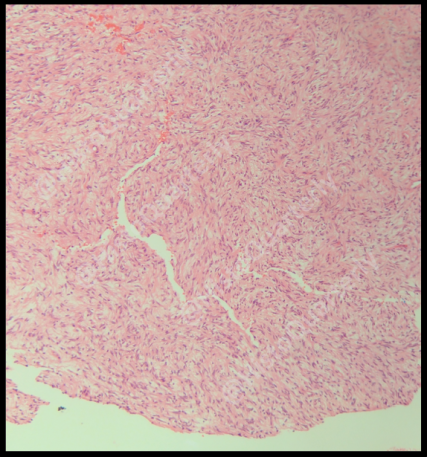 We combined this immunostain with a panel that included Ki-67 to examine the mitotic activity of the tumour (which would show how many of the cells are dividing at one time and hence how quickly the tumour is growing). There were less than 5% of nuclei staining with Ki-67, demonstrating a slow growth rate, which is another key – albeit non-specific – feature of this benign tumour.

An additional feature that may be seen in a schwannoma is cystic spaces lined by Schwann cells, which can resemble glands or dilated lymphatics. Where this feature is quite pronounced, the schwannoma may be classified with the prefix of “pseudoglandular”. I don’t have an example of a case with florid cysts but I did stumble upon this case with a couple of them neighbouring each other in the same field:

A low power H&E showing cysts within a schwannoma

A medium power H&E taking a closer look at the cysts lined by Schwann cells.

And that’s a wrap for this quarter so thank you for reading my blogpost, I hope you found it interesting and informative. Please feel free to like this post and make any comments below.

In the meantime, until the next blogpost, come join in the conversations with me on Twitter and like my page on Facebook by clicking on the following buttons:

Hello, my name is Della and I'm a Specialist Scientific Lead in histological dissection working for the NHS in England.
View all posts by Della Thomas »
« HistoQuarterly: PYOGENIC GRANULOMA
Four years hard work paid off! »