This year is National Pathology Year, and the organisers have allocated each month with a theme.  October’s theme is Cancer Screening.  This month is also Breast Cancer Awareness Month, and so to keep in check with both these themes I have decided to write about breast tissue.

Contrary to what Stringfellow will have people believe, there is another more functional role for the female breast.  This is to produce milk for newborns and infants, which is crucial for them to complete their development.

Milk exits the breast via the teat of the nipple.  Directly behind the teat there are around 15-20 lactiferous sinuses (not shown), into which all the converging lactiferous ducts drain their milk.  Below, we see a section through the teat of nipple (click it for a crisper image).

A low power H&E of the teat, showing the skin edge and cross sections through a small number of ducts, surrounded by collagen and numerous fascicles of smooth muscle (not obvious at this magnification).

A closer look at the teat skin (below) shows the outermost layer (epidermis) to be cornified (contains keratin) and to extend deep into the dermis (layer below the epidermis) at regular points.  The function of keratin is to protect the nipple from any trauma caused during breast-feeding (youchers!!).

You will also note, in this photomicrograph, some sebaceous glands, too.  These occur in varying numbers throughout the nipple skin, but are most abundant in the skin that encircles the teat (called the areola), so if you’ve ever wondered what those tiny lumps (a bit like goosebumps) are in your own areola, they’re these sebaceous glands.

The smooth muscle intertwined within the connective tissue is what enables the nipple to become erect.  Here’s what the muscle looks like a bit closer up.

As we journey from the lactiferous sinuses at the base of the teat, and continue through just one of the connecting lactiferous ducts, we travel deeper into the breast tissue along what represents a long narrow channel surrounded by fat and collagen.  Eventually the channel branches out again into a number of other ducts that open out into lobes and then subdivide into smaller lobules.  These lobes are the true secretory units of the mammary gland, where the milk is produced.

Prior to pregnancy, and without the stimulus to produce milk, the lactiferous lobules remain underdeveloped and so the lactiferous ducts, instead, end in small, shrunken sacs known as saccular evaginations.  Because of this, the size of the breast in a non-pregnant female is more representative of the amount of fatty tissue contained within, rather than the glandular tissue.  Only during pregnancy do the lobules become fully developed, and only then are the mammary glands referred to as “active”.  The size of the breast increases when mammary glands are active, and this is due to the lobes filling with milk.

High power H&E of lactiferous ducts in the nipple. The lumen is the gap in the duct through which the milk drains.

Deeper into the fatty part of the breast, the ducts are lined with a different type of epithelium called stratified cuboidal (square-ish) epithelium – though you may be excused for thinking they look like columnar (rectangular) epithelium.  This is often noticed, but the rectangular appearance occurs due to the stacking of cuboidal-shaped cells situated on top of cells called myoepithelial cells, which act like little contractile cells that expel the secretions from the glands.  The myoepithelium of these ducts are sandwiched between the epithelium and the basement membrane (the membrane which anchors the epithelium to the rest of the tissue).

High power H&E of lactiferous ducts in the deeper breast tissue. These are lined with cuboidal epithelium.

Aside from the glandular units, the bulk of the remaining breast tissue is made up of fibrofatty tissue, known as the pectoral fat pad.  Branches of the internal thoracic artery provide the mammary tissue with a good blood supply.

Here’s a closer look at the fatty tissue.  You can identify the individual fat cells (with their pinkish cell wall) and their purplish nuclei at the edges.

High power H&E of fat cells. Little fact about fat: the total number of fat cells in your body remains constant, it is only the size of them that varies.

The breast tissue lies directly above the pectoralis major muscle.  All of the structures within the breast are firmly attached to this muscle by a number of suspensory ligaments.  A layer of loose connective tissue (areolar tissue) keeps the muscle and mammary tissue separate.

Breast tissue has a number of normal appearances when we look at it under the microscope, and that depends on the female’s age, stage of menstrual cycle and gestation.

At puberty, the circulating hormone oestrogen, along with prolactin, stimulates lactiferous duct development, and the increase in size of the fatty tissue surrounding them.

Throughout the menstrual cycle, progesterone levels increase and stimulate the formation of small buds at the tips of the lactiferous ducts,  These “alveolar buds” mark the preparation for conception.  In the absence of pregnancy (and subsequent stimulation from maternal and placental hormones), these buds fail to fully develop, and so regress and disappear.

Only during pregnancy do the alveolar buds develop into lobes and begin to produce milk.

Looking out for abnormal changes in breast 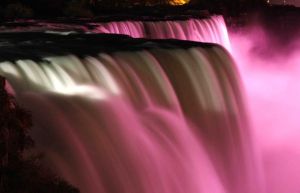 As I mentioned, October is Breast Cancer Awareness Month – even Niagara Falls turns pink for the cause.  But how aware are we?  This reporter from AdelaideNow thinks not very.

Breast cancer takes more than 1000 women’s lives every month and Breakthrough Breast Cancer want you to be aware of the symptoms, because it’s not just a lump that tells us something’s not right.

So, do you know the signs and symptoms of breast cancer?  Here’s what to look out for:

1) a lump in either the breast, upper chest or armpits.

2) one breast has become a different size to the other.

3) changes in the skin texture, such as dimpling (like orange peel), or redness.

4) changes in the appearance or direction of the nipple, including inversion.

Breast cancer may take several years to show symptoms and it becomes more common in women aged around 50 years and over.  Around this age, women will be invited to attend a breast cancer screening test.

As well as breast tissue undergoing a number of normal changes throughout the menstrual cycle, this also occurs during menopause.  With that, it’s important for women to check their breasts regularly, to become familiar with the differences during these times and to be able to spot anything that may be amiss.  Similarly, it is also important not to check daily because small changes may go unnoticed due to the “that was there yesterday” stance.

They say there’s an app for everything, so it’s no surprise that there’s one for women to help them self-check their breasts for lumps.  Check it out, here (HT Bertalan Meskó).

If you want to know more about breast cancer, whether you’re finding out for you or for a loved one, there’s a lot more information at Cancer Research UK and Breakthrough Breast Cancer.

All images are Copyright © 2012 Della Thomas, unless otherwise stated.

Hello, my name is Della and I'm a Specialist Scientific Lead in histological dissection working for the NHS in England.
View all posts by Della Thomas »
« Stand Up To Cancer
The notion of self-promotion »